BC during the Greco-Roman period; however, on the fringes of the city stands the

Giza Pyramids, some of the oldest structures on Earth. Despite their proximity

to Cairo, the difference in age between the pyramids and the city itself is proof of their different histories.

Cairo was founded. This civilization named this area Memphis, which was the

home to the pharaohs that raised the pyramids.

What was the first capital of ancient Egypt? 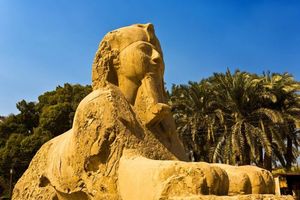 Memphis was the first capital of Ancient Egypt. Most of the pyramids found near Cairo,

was the most important city in Egypt and most probably the world.

Manf, Mn nfr, or Memphis is an ancient Egyptian city – one of the World Heritage Sites –

and it was founded in 3200 BC by King Narmer. It was the capital of Egypt in the

(god of craftsman and architects) was worshiped.

Why was it called Memphis? 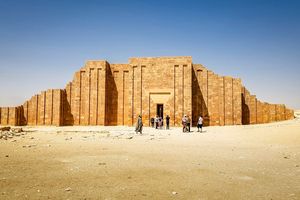 Memphis was known as the “White Wall,” most probably referring to the palace of the king,

which was built with whitewashed bricks, until the 26th century BC.

The latest name of Memphis is a Greek translation of the Egyptian Men-nefer,

which is the name of a nearby pyramid built in the 6th Dynasty.

Where is the City of Memphis?

of the Nile River, in a village called “Meet Raheena” in Badrasheen, a city

located 13 miles south of Giza. The site is over 5000 years old so little

of the actual city remains, but it still boasts several impressive artifacts

and an array of statues that have been uncovered in the past century.

The Open Museum in Meet Raheen

and the huge statue of Ramses II which lies on the ground. There is also a statue

of Alabaster in the image of the Sphinx and some other monuments.

Most impressive by far is the massive statue of Ramesses II that was uncovered there,

long after the height of Memphis’s power had waned in the 13th century BC,

even 1500 years after the Giza Pyramids were completed.

Located in the remainings of ancient Memphis, a 10-meter length statue

carved from limestone was discovered near the temple of God “Ptah”

(god of craftsmen and architects) by the Italian archeologist Giovanni Caviglia in 1820.

Another giant statue of Ramses II was also found in the temple of God “Ptah”,

in Ramses Square in Cairo Museum until 2006. This statue is now the most

remarkable icon at the entrance of the Grand Egyptian Museum.

King Ramses II, often regarded as the greatest, most celebrated, and

expeditions that regained posse to Egyptian lands such as Nubia and Canaan.

His successors and later Egyptians called him the “Great Ancestor.”

The Necropolis of the Ancient City of Memphis

Considered one of the most important archeological sites in the world,

Kings, non-kings, and also animals. The most important tombs found in the

found in the Step pyramid of Djoser- the first pyramid ever built.

has helped the modern civilization to learn more about life in the Old Kingdom.

It is one of the only resources of knowledge about life in that era.

Saqqara Necropolis is also home to the largest complex of animal cemeteries and cult buildings.

Ancient Egyptians had many pets and animals were very important to agriculture.

considered sacred such as falcons, hawks, and scarab beetles.