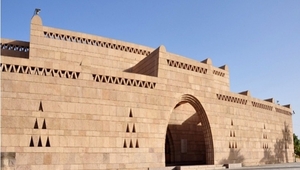 tribute to the culture and influence of Nubia and the Nubian people on the history of Egypt.

This ancient culture, every bit as old as that of Ancient Egypt, existed along the

banks of the Nile for millennia in the areas we call southern Egypt and northern Sudan today.

It nearly destroyed by the construction of the High Dam, completely

submerging the ancient heartland of Nubia, and over 100,000 people to relocate.

The museum houses a collection of artifacts from the Nubia region,

Nile Valley from prehistory all the way through the pharaonic ages,

the arrival of Christianity and Islam, and the construction of the dam in the 1960s.

The plight of the Nubia people highly politicized issue. In the rush to develop

the country in the 1950s and ’60s, the Egyptian government did not provide

adequate compensation or sufficient planning to resettle the people 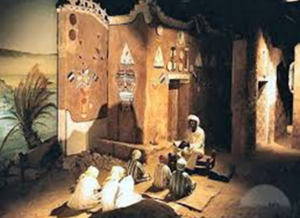 whose livelihoods affected by projects like the High Dam.

to high ground, like the Abu Simbel temples. Others  dismantled and shipped

abroad as compensation for aiding this effort. The Dendar Temple that now

stands in the New York Metropolitan Museum one such gifted Nubian monument.

The Nubian Museum intended to help rectify this injustice. While

that may not be possible, especially since it still makes no mention of the

consequences of the dam for the Nubian people, it very effective at telling

the story of the region and providing a glimpse of the culture that continues to exist here.

Reconstructions of traditional Nubian houses with artwork salvaged from

The museum near the Fatimid Cemetery, which is full of small mausoleums

dating from the 9th century. Some of the tombs here belong to local saints

seeking blessings. The cemetery stands next to the ancient granite quarry

the Unfinished Obelisk is located. At nearly 140 feet long,

it would have been the largest obelisk ever carved by the ancient Egyptians.

when a flaw in the stone discovered. Visit these two sites along with

it make for a great day of activities all located within a small area to minimize walking.