Today relatively little remains of what is thought to have once been the most
impressive temple complex on the West Bank of the Nile. Several clusters
of pillars and a few damaged statues stand among a large field of ridges, holes,
broken foundations, and pieces of statuary that mark out where the rest of the
the complex once stood. The reputation of this site now tied more to the reputation 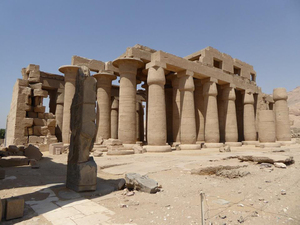 of the man, that commissioned it, rather than the appearance of its ruins.

around Luxor and further south. He a prolific builder and also had a habit

of repurposing existing monuments to add to his reputation.

He the greatest conqueror in the history of Ancient Egypt, ruling for 67 years 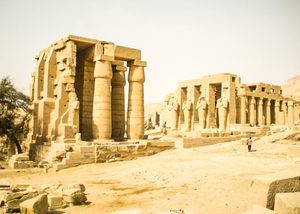 into new frontiers in the south, west, and north in Syria.

This temple dedicated to him and a testament to his power and influence and
it meant to be the greatest of all monuments.
Plundering by subsequent pharaohs, who could no afford to quarry their own stones,
natural disasters, and finally these sites use as a church by early
Egyptian Christians have all taken a toll on this once great structure, but even

among the scattered ruins evidence of its greatness still persists.

There the remains of a toppled colossus of Ramesses II that  estimated to
have stood over six stories tall, the largest freestanding sculpture ever in Egypt
and one of the largest ever attempted anywhere in the world. The decoration of the
remaining columns in the hypostyle hall are also impressive, showing the fine craftsmanship

with defined the Ramesseum’s construction.
Though relatively little remains, the Ramesseum is still an exciting visit, especially
for those with a particular interest in the life of Ramesses II,
the greatest of the pharaohs.  Its layout was the inspiration for the much better-preserved
the temple complex at Medinat Habu, constructed by Ramesses III.
Tap to chat
1
Need Help? We are Online
Hello,
We are online via WhatsApp
please feel free to contact us.