What is the Dandra Complex

Dendera temple On the west bank of the Nile opposite the city of Qena,

most important religious temples. The complex is the home of the Temple of Hathor

(The deity of love, music, & fertility) one of the most preserved temples in Egypt

and other temples & sanctuaries that were unfortunately lost in time.

The complex of Dendera temple 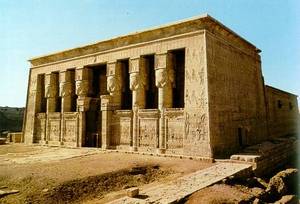 covers 40,000 sqm surrounded by a hefty mud brick wall that contained the remains

of the 6th dynasty of the old kingdom. The complex holds ruins of a Coptic church,

and Mammisi (A birth house related to the nativity of the deity), a small sanctuary

located in front of the Pylon dedicated to the goddess Isis that portrays the goddess of the sky Nut giving Birth.

The Temple Of Hathor of Dendera temple

The main highlight of the complex is the majestic temple of Hathor, built-in

their names in History and honor the deity Hathor. The temple contained

emperors and a magical ceiling filled with enchanting astronomical decorations

such as the sky deity Nut bending herself towards the earth with the sun disc,

there is a representation of the legendary sun boat of Hathor and her husband Horus being given offerings by Ptolemy VIII.

The Zodiacs of  Dendera temple 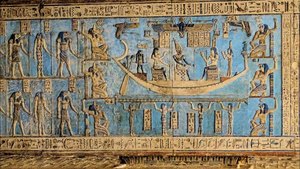 found at the Osiris chapel at the Hathor temple containing Images of the ram,

the bull, the heavenly twins, the crab, the lion, the virgin, the scales, the scorpion,

the archer, the goat, the watering pots, and fishes with glittering tails.

They used in creating and organizing the ancient Egyptian calendar.

In 1820, it removed from the temple ceiling by French invaders and take to the Louvre and replaced with a fake.

resembling a lightbulb attached to an advanced electric system but many

archeologists believe it’s a mere theory and couldn’t be further from the truth, but only time will tell.