The ancient Egyptians were one of the first peoples to have an existential crisis as they wondered to meaning through reflecting through nature and so was the birth of the ancient Egyptian religion. The ancient Egyptians came up with a religious system built on a combination of beliefs, rituals, and practices within a complex society built on the notion of polytheism and linked by their common focus on the interactions between the human and the divine realm.

Religion could have been the most important aspect of their life as it included magic, mythology, medicine, science, herbology, spiritualism, psychiatry which gave them a more profound understanding of concepts like higher power and life after death. The ancient Egyptians believed that life on earth was part of eternal life, just a stepping stone for the next life, and in order to continue to the afterlife, one has to live a life of purpose that can be found in religion.

The ancient Egyptian religion centered on the interaction with the various deities who were believed to be in control of the world, so they would pray, provide offerings, build a temple and honor them in every possible way to the gods to win their favor.

The ancient Egyptians believed that depending on each other’s was the will of the gods who desired to produce an infinite amount of happiness and pleasure through their mortal existence.

The rulers of Egypt were also believed to possess a divine as they were viewed to be intermediaries between their people and the gods whose main duty was to sustain the gods, so they can maintain order in the universe. Everyone in Egypt was expected to uphold the principle of Ma’at of harmony a.k.a the order of the cosmos and to be perfectly aligned with the forces of light in order to thrive in the afterlife.

Ancient Egyptian religion was known as Heka (magic) which was viewed as the building material of the world since the time of creation, it was the power that the gods used to perform their functions and allowed the humans to communicate with the gods. They also believed that the phenomenon of nature is a divine force on its own so they honored\ its elements like animal characteristics or abstract forces.

They viewed the ancient gods of Egypt as the lords of creation and custodians of order, everything good in Egypt was because of the graces of the gods. They also worshipped a pantheon of gods that were involved in every aspect of their nature and society, each deity would exist in different manifestations and perform multiple mythological roles, and would often be connected to or in an animal form. Each god or goddess was associated with a particular region where their cult resides. The deities were in a constant manner of transformations.

the ancient Egyptians would group or even merge gods together to fully reflect these relationships. The relationship with the gods was somewhat fluid based on a series of syncretism with each other, some were based on similar characteristics while others were between gods with different natures. The gods have many artistic images on temple walls and tombs which was able to shed some light on the nature of the gods themselves despite their mysterious origin and identity.

The ancient Egyptian religion was based on a series of mythological beliefs, like the ancient Egyptian myth of creation which States that there was nothing but dark spiraling waters of chaos stretching into infinity, and out of it rose the primordial hill is known as the ben-ben where Atum (Or Ptah in other versions) stood then he created his children to end his loneliness, Shu god of air and Tefunt the goddess of moisture. They created the principles of life and order in their new world.

When they returned to their father after being missing for a long time, Atum shed tears of joy that dropped in the dark giving birth to men and women. Shu and Tefnut gave birth to Geb (the earth) and Nut (the sky) and then they gave birth to the five gods most recognized Osiris, Isis, Set, Nephthys, and Horus, then they gave birth to countless deities like Thoth, Bastet, Hathor, and many more. There is also the famous tale of Osiris and Isis.

where divine ruler Osiris (god of fertility) was murdered by his brother Set (god of chaos), then resurrected by his sister and wife Isis (Goddess of motherhood) to conceive an heir, Horus (god of the sky). Osiris then became the ruler of the underworld, while Horus eventually avenged his father and became king of Egypt. The trinity of Osiris, Isis, and Horus was associated with the pharaohs as a symbol of unity and victory. During Egypt New Kingdom (1570-1070), the heretic pharaoh Akhenaten attempted to enforce monotheism or rather monolatry by making the sun-disk Aten the only god of Egypt, but he was unsuccessful as his son and successor Tutankhamen.

According to ancient Egyptian beliefs, the cosmos is divided into three types of sentient beings, the holy gods, the deceased humans who exist in a divine realm, and the living humans whose most important characteristics are the Pharaoh who was the only line of communication between the humans and the divine realms. They understood the value of balance, order, Justice, truth, and harmony centered on the principles of Maat that had existed since the creation of the world.

It was viewed as the fixed, eternal order of the human society and the cosmos which would explain why it was under threats from the forces of chaos and disorder. The principles of Maat encouraged the concept that everyone should coexist and cooperate on a cosmic level, and the concepts were sustained through offerings and rituals. The ancient Egyptians understood the close connection between the cosmos and the conception of time that was concerned with the maintenance of Maat that was renewed by periodic events through the linear passage of time which echoed the original creation.

There is also the ba which is a set of spiritual characteristics unique to each person and the funeral rituals were meant to release the ba and the ka so they would rejoin to form the Akh and continue to the afterlife by the solar boat of Ra the sun god. The journey to the afterlife required the body to be mummified in order to be ready for the return of the soul. The deceased will be judged in the hall of truth in the underworld by Osiris by weighing his heart against the feather of Maat, if the heart was lighter than the feather, the soul would continue to heaven a.k.s the fields of reeds but if it was heavier then the soul would be devoured by the monster Ammut and ceases to exist.

All the information related to the religious rituals was frequently written on papyri. Temples and tombs are also inscribed with such texts, often accompanied by illustrations created by priests. The Egyptians also produced many prayers and hymns in the form of poetry. The most important and significant are the funerary texts, the book of the dead, the pyramid texts which were used as instructions for those performing the ritual. Magical texts describe rituals that were part of the spells used for specific goals in their everyday life. They would use oracles to settle disputes or inform the royal decisions in the new kingdom.

The ancient Egyptians held many festivals to integrate the sacred value of the gods within their daily lives. It contained morning offering ceremonies and re-enactments of ancient Egyptian myths like the opet festivals; they also celebrated certain times of the calendar like new years’ eve Wept-Renpet festival and the festival of the harvest the wadi festival. They also celebrated the pharaoh’s reign with the sed festival which celebrated the passing of thirty years of his reign. The festival of Epagomenae celebrated the birthdays of the gods in the last five years of the year according to the myth of creation. 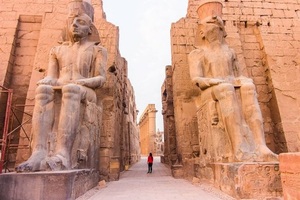 Temples Over the course, the ancient Egyptian history religion was able to inspire the production of a massive number of temples like Karnak temple, Valley of the Kings, Philae temple, Edfu temple, Abu Simbel, and many more that you can visit during your Egypt tours, which reflected the true devotion of the public to the gods. They held images and statues which were cared for and worshipped on a daily basis. The priest would hold the festivals and the rituals at the temple under the guidance of the government.