Almost all of what we see today of Ancient Egypt is exclusively dedicated to
the pharaonic royalty. The monumental building projects that the kings of
Egypt commissioned have stood the test of time much better than artifacts
from everyday Egyptian life due to their massive size and the fact that they
are literally carved out of stone, but the triumphal imagery of the pharaohs

in the temples and royal tombs around Luxor can become repetitive.
It nearly gives the false impression that the kings and queens of Egypt lived alone
along the Nile. When you are suffering overload from all of the temples and royal
tombs, a visit to the Workers’ Village (or the Tombs of the Nobles) provides a good.
change of pace and some welcome insight into the lives of more ‘normal’ ancient Egyptians.
Deir Al-Medinah is unique in that it is the lone example of a well-preserved Egyptian
village near Luxor. Kings and queens did not live here; this was the home of the craftsmen 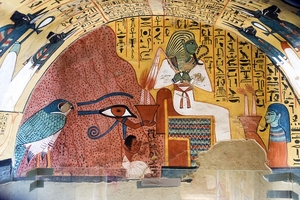 that served them. Around 70 families lived on this site as state-employed artisans to decorate the royal tombs.

These families were probably still somewhat wealthy relative to average people given
their status as skilled artisans, but the small homes and humble private tombs found

here give as good an indication of what life was like for ancient Egyptians as can be found anywhere else.

The small tombs are beautifully decorated, as one would expect of the tombs that the
artists decorated for themselves and their families and the imagery inside depict.
simple scenes from their lives and families. It is a welcome contrast to the generic
depictions of the afterlife found in the royal tombs at the Valley of the Kings and the Valley of the Queens.
Tap to chat
1
Need Help? We are Online
Hello,
We are online via WhatsApp
please feel free to contact us.