During ancient times, there used to be many festivals known as “Heb” throughout

the year to give thanks to the gods and make divine favors. In the festivals

in ancient Egypt, the Egyptians would offer sacrifices, offerings and celebrate

the might of the gods, but the true purpose of these festivals was to behold

implemented by the Pharaoh. Festivals in Ancient Egypt simply served as

manifestations of the divine in human existence and, as such, created

a pattern of life for the Egyptian people. 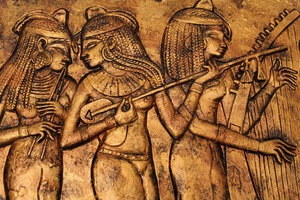 three seasons, the first season was Akhet the season of flooding, the second

their own special festival. The ancient Egyptian festivals would involve

a procession of a god by boat or land across a specific route such as the route found at Karnak temple.

At the beginning of each year, they would hold a festival and also at the

end to emphasize the philosophy of the eternal, cyclical nature of life. Egypt contained countless festivals across the year such as :

This festival celebrated the superadded days at the end of the year.

God is celebrated. According to the myth of creation, The goddess of the

year, which made the God of Knowledge play a game of Senet with Khonsu

and win five day’s worth of moonlight which nut gave birth in. The first day

was the birth of Osiris, the Lord of the Duat (the Egyptian underworld), The

the second day was the birth of Horus, a very prominent falcon-headed deity

associated with kingship and the sky, The third day celebrated Seth, a god

associated with chaos, war, and the deserts of Egypt, The fourth and fifth days

celebrated the goddesses Isis and Nephthys, two sisters who were associated

with protective funerary rites and who brought the god Osiris back from the dead.

The Festival of Opet

Opet festival took place in Akhet during the second month, it is the most important

as it stretched across 11 to 15 or even 20 days. In the festival, the king was rejuvenated

by god Amun at Thebes. The festival would start with the Theban Triad (Amun, Mut, and Khonsu)

would travel from the Karnak temple to the temple of Luxor. In Luxor temple,

of the cosmos each year. The pharaoh was also part of this union

and participated in the regeneration of this divine power.

disappears from the sky then appears at the eastern horizon at the sunrise.

and rebirth of the land and the people. The festival depended on the inundation of the Nile river.

The Festival of the Valley

The beautiful feast of the valley honors the souls of the deceased A.K.A festival

of the dead which took place between the harvest Shemu and the Nile flooding Akhet.

bring the past into the present and with the help of the eternal godson into the future.

the procession begins with the statues of Amun, Mut, and Khonsu (the Theban Triad)

taken from their temples to visit the mortuary temples and necropolis

across the river, plus images of the deceased carried so their souls could

join them and the living would bring flowers, food, drink offerings similar to the day of the dead in Mexico.

of the gods. the king also required to run around an enclosed space to prove

The festivals elevated the people toward the divine, bring the present with the

past and pave the way for the future or simply times where people could relax and enjoy themselves.