Al-Azhar Mosque is simply one of a kind as there is no one like it in the world. In 970 A.D, the Islamic Shi’ite Dynasty the Fatimids that ruled Egypt from the 10th to 12th century constructed the mosque to be a place of worship and research in Islamic studies. The mosque’s main purpose was to spread Shi’ite beliefs to the Arabian community and maybe the entire world. But despite that, all the Sunni and Shi’i student put their differences aside and worked together to create something extraordinary as the mosque is a true symbol of pluralism and the only regulating authority on Islamic theology to the entire world. 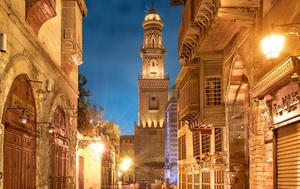 Components of Al-Azhar Mosque Al-Azhar mosque was named Al Azhar after the Prophet Muhammed’s daughter Fatimah al-Zahraa. It was designated for the Shi’a Fatimid congregation and later, in 988 A.D it was turned into a university as it became the world’s second-oldest educational institution. The university was one of the world’s preeminent centers of learning, drawing students from Europe and all over the Islamic empire.

it started with 37 scholars who worked in religious teachings but nowadays they are hands-on in every field of study from foreign languages and literature to all different fields of science. The university went through a lot over time as in 1171 A.D it was closed for nearly 100 years by the Ayyubid ruler when the Egyptians started practicing and teaching Sunni teachings, but in 1266 A.D it was reopened by Mamluk Sultan Al- Zaher Baybars and the teachings were replaced with Sunni theology.

The architecture of Al-Azhar Mosque

it’s known to be a harmonious blend of architectural styles as it rebuilt, enlarged, and redesigned over more than 1000 years and various modifications and additions made to the mosque throughout its long history. It holds five majestic Migrates, three of they  built in 1340, 1469, and 1510, a large prayer area,

religious and non-religious schools and is famous for its breathtakingly beautiful marble central court it was at the center of the French opposition against the French forces in the late half of the 18th century because more than a house of worship or education, it is a symbol of enlightenment and righteousness.