1 Day Trip from Luxor to Cairo by Plane 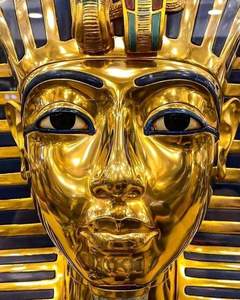 Tutankhamun Tomb Discovery in 1914, a relationship between a gifted Egyptologist

of modern methods of archaeology and recording for one final season

as he was getting old and running out of hope.

the tomb was discovered by American Egyptologist Theodore Davis in

lost forever. But they believed the tomb of Tutankhamen is not lost but

simply forgotten and it’s their destiny to remind the world once again.

The final search began in the Valley of the Kings on November 1, 1922, and

by the grace of God, on November 4, 1922, Three days later while systematically

investigating a line of huts, the young water boy stumbled on a stone that appeared

a slow a careful excavation of the sunken staircase leading to a mud-plastered doorway that carried the royal seals of King Tut.

asked “Can you see anything?” which Carter replied, “yes, Wonderful Things”.

One of these wonderful things was the tomb of King Tutankhamun,

which open for the first time in modern history on 16 February 1923. About

5.398 items found which Carter took 10 years to document like Tut’s

famous golden face mask, his dagger which made from a meteorite,

archery bow, golden chariot, and many more majestic items located at the

Egyptian Museum in Cairo. The discovery  covered by the world’s

media & press that captured the attention of everyone around

the planet during that Era and gave rise to Egyptomania worldwide.

Unfortunately, the Public seemed to pay more attention to the so-called

after the discovery which led to many supernatural speculations but