The Nile Cruise – Bespoke Activity to Do in Egypt

complete with a Nile cruise between the immortal heavenly cities

Egyptian holiday since Victorian times. The Nile cruise is able to evoke

the iconic sights of ancient Egypt. All the new visitors will have a variety

of options when it comes to a Nile cruise. Here is what you don’t know

onboard a Nile cruise while exploring all the history and beauty of this divine country.

At the Nile at the beginning of the 19th and 20th centuries; travelers create what

became known as a Nile cruise. In 1858, the main manner for travel across

reserved only for wealthy travelers who seek the ultimate luxury & exclusion

and a Nile cruise is over leisure travelers who wish to spend their vacation in a luxurious class fashion.

Aswan to Luxor would take 4 days. During your tour, you will visit the east

ancient Egyptian Civilization plus experience the full luxury and comfort on this floating heavenly vessel.

the full luxury between the beautiful destinations of ancient Egypt.

by boarding one, there are three Nile cruise categories:

On the budget and cheap Nile cruises holiday, travelers will experience everything

prices. Every traveler will get to witness the beauty and greatness of this

amazing civilization at every sunrise and sunset during their voyage.

a five stars treatment and accommodation between the golden cities of Luxor and Aswan.

High luxury Nile cruise is the finest cruise that ever sailed across the Nile,

timelike how the ancient pharaohs used to live in ancient times. Everything

a king between the immortal cities of Luxor and Aswan.

beauty of the Nile, Luxor, and Aswan all by yourself. The second one is

as the most exclusive and luxurious way to experience the Nile river in total comfort, peace, and tranquility. 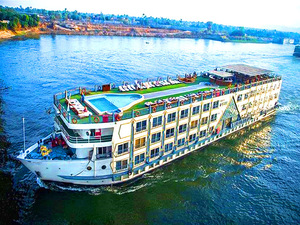 who appreciate the beauty and history of the ancient Egyptian civilization.

Onboard the cruise everyone will experience the most incredible treatment

a sense of excitement, joy, and blessing on whoever lays their eyes on them between Luxor and Aswan.

Onboard the cruise is an international telecom connection including wifi and

satellite phone, inner swimming pool, sun deck where you and your company

can relax under the beautiful skies, a full entertaining center where the belly

the main restaurant, a safe deposit box, a beauty center, a laundry, a spa,

and gift shops. Plus all the accommodation is superb both deluxe single

or double beds offering the finest view from their enchanting windows.

The cabins are equipped with air-conditioning, sat-tv, mini-fridge,

a hairdryer, en-suite bathroom with bathtub, overhead shower, and

the lifestream of this mesmerizing country.

you book early. Onboard the Nile cruise, the gates of heaven are opened and

will have your family experience full joy.

is moderate and calm, which is important since you’ll be hopping on and off to

Luxor is intense, and it’s not recommended that you travel during the peak

summer months from June through August.

What You Will Visit During Nile Cruises in Egypt

of beauty and grandeur created by the ancient Egyptians which are:

to Amenhotep III in the 18th dynasty.

example of the classical architectural style. Finally comes to the heavenly

like the Ramsess dynasty, Hatshepsut, Tutankhamun, Amenhotep I, Thutmose, and more.

a position that made it act as the final frontier of Egypt. During Egypt new

The obelisk showcases information about the construction process of

obelisks through the history of ancient Egypt. The grand temple of Abu

1244 B.C by Ramses II to immortalize his identity & legacy.

Greco-Roman. In 237 BC, The temple of the Sky God Hours, Edfu temple

of the crocodile deity Sobek was built between 332 and 395 BC. Finally,

by the Egyptians and the Soviet Union called the Aswan high dam.

Answers for Most Common Questions About Nile Cruises in Egypt!

What You Don’t Know About Nile Cruises – Egypt Tours Portal

Is there a Nile Cruise from Cairo to Aswan?

Yes, there is a long Nile cruise from Cairo to Aswan for 10 to 15 days starting from

the point of departure whether Cairo or Aswan, departing at least once a month

while enjoying the most luxurious and relaxing service and treatment onboard the Nile valley.

Is a Nile Cruise Wheelchair-Accessible?

calls first so the cruise can be ready. The accommodation and the interior of most

cruises are fully prepared and originally designed to handle this like any traveler.

How Safe are Nile Cruises?

like your reservation on your chosen Nile cruise. The Nile cruise itself is secure

and totally safe as there was no accident of any kind in the last three decades.

It is equipped with the usual safety features, a life jacket, a resident doctor on

board, and cams all over the Nile cruise watching every move.

Will there be Wi-Fi on the Cruise?

at cheap prices. You can also have a VPN line with you to always connected.