1 Day Trip from Luxor to Cairo by Plane

Tipping in Egypt While planning for spending a vacation in Egypt, travelers

giving tipping to locals in Egypt. Who deserves to take your baksheesh and

whom you should ignore and of course the one hundred dollars question,

give tipping in Egypt??? We will explain everything that revolves around the

word tipping in our article so that you understand all about it.

What is the Meaning of Bakshish?

giving them some of the changes that can be estimated by the type of service you have received.

not something you have to do, on the contrary, it is something that should

and offer assistance to other foreigners who come to visit Egypt.

How Does Tipping Work in Egypt?

By giving baksheesh or gratuity to someone, you are saying to him or her

ever force you to give any amount of money that you don’t want. It

is something really traditional in Egypt which is inherited hundreds

So after receiving some kind of service, you can offer the person who assisted

you with some money that is determined based on the services you received.

While planning a vacation in Egypt and calculating the costs of your trip,

change in your pocket as you will never know when you are going to need a bill.

What is the Best Currency for Tipping in Egypt??

and shows lots of satisfaction towards the services you have received.

How Much Should I Do Tipping in Egypt?

tipping but in general, there are some tipping guidelines that can assist you to

know how much money you can spend on such a matter as follows:

On the board of the Nile cruises, you will find a gratuities box that is left at

the reception and you can leave there the amount of money you want.

General tipping at the restaurants is around 10% of the total cost of your bill.

When Should You Tip in Egypt?

You should tip the one who seems in need of your money, who does you a favor,

and who offers you the best services you need. Such people don’t show lots

admiration for their services. So if you found anyone like this in Egypt, don’t hesitate in giving him/her tips.

When Shouldn’t You Tip in Egypt? 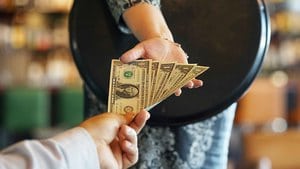 Unfortunately, just like any other country, there are people who make use

they actually don’t deserve. In such situations, we will say out loud that

deserve your money. Some people are using children to get the money

in that by simply saying no and leaving them without giving them tips.

Otherwise, if you found someone who needs help, feels free to give him/

her a suitable amount of money you want. It is an act of kindness you

show to others and may Allah gives you what you really deserve for such good deeds.

have your dream vacation and spend the best time ever with your family and friends.