Things to Do in Alexandria Long-time ago before the age of the modern man,

manner. Alexandria was constructed in 331 BCE by Alexander the great who

choose to leave a mark on the coast of the Mediterranean,

conquest in 641 AD when Cairo became the official capital till today.

There here an endless number of incredible monuments and artifacts to

magical and memorable. Here are the best things to do in Alexandria 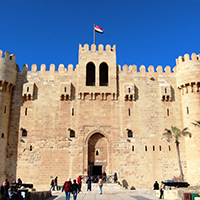 Alexandria holds many wonders, one of which is the phenomenal Islamic citadel

lighthouse, created in 1477 AD by sultan Al-Ashraf say al-din Qa’it bay on the

956 AD and again in 1323 AD. Visiting Qaitbay Citadel is one of the most famous

things to do in Alexandria that every traveler does while going to Alexandra.

column ever constructed outside of Rome. It is 28m tall and 2.7 m wide built from

Diocletian is located on its western upper side. It became known

mistakenly convinced that the remains of the Roman general known as Pompey were located at the high top of the pillar.

the catacombs of Kom El Shoqafa. Alexandria is the home of the unique world-famous

culture with the ancient Egyptian Pharaonic artistic elements in a magical fashion.

of mesmerizing greek and roman artifacts and decorations between its three stories levels.

Alexandria library created in 2002 with the help of UNESCO. It was designed to

and a collection of rare books plus art galleries and exhibits.

the mosque which is located near the citadel of Qaitbay, built in the honor of the

his tomb inside the mosque. The mosque has a beautiful design that makes

any exploration tour in Alexandria something special.

6. Find Out the Serapeum Temple

The Serapeum of Alexandria is one of the most significant and hidden monuments,

known as the minor version of the great library. The entire site was unfortunately

plundered and the only monument left standing is Pompey’s pillar.

ancient times and places walked on the same sands.

8. Witness the Artifacts Of National Museum

from Pharaonic, Greco-roman, Coptic, Islamic nature, constructed in 2003 to prove

is one of the best things to do in Alexandria. It has three floors filled with artifacts

mainly from the Hellenistic and Roman ages in the shape of jewelry, weapons,

statues, one of the most famous is a real sculpture believed to be of Alexander

the Great, a number of mummies plus modern 19th and 20th-century artifacts.

which are 150 acres (61 ha) of beautifully designed gardens. It was used as

architectural styles with an eccentric Victorian–style bridge running out

to a small island of pylons. The place is ideal for families of any age,

a pleasant escape from the city center offering entertainment, tranquility,

beautiful historical constructions, and a heavenly view across the Mediterranean.

10. Book A Ticket to the Royal Jewelry Museum

A woman’s best friend has always been diamonds, and a living example

of that is the royal jewelry museum where the finest treasures are present for exploration.

, and rare 19th-century paintings. Watch these shining places light of your life.

with 6 spans across Alexandria Cornich offering a panoramic view of the Mediterranean sea.

where you will find a great open-air marketplace. The area will be filled with

butcher shop, enjoy the cafés, restaurants, and shops that sell all sorts of artifacts

and awesome goods. In the markets, you’ll be able to find a variety of clothes,

accessories, bangles, jewelry, and anything else you desire.

sculpture of Apis in black Granite, a sacred bull, a number of mummies,

sarcophagus. It has 27 halls and an amazing garden that offer a memorable introduction to Egypt’s Greco roman Period.

popular landmarks in the city of Alexandria, created in the 4th century AD as

a common feature of the Greco-roman period. It was discovered in 1960 AD

with a diameter of about 33m and 13 rows made of European white marble. So if you found it near there check it out.