Sharm El Sheikh At the southern of the Sinai Peninsula of Egypt,

the coastal city of Sharm El Sheikh is the queen, and all year round,

thousands of tourists gather at the beautiful beaches of this lovely resort town.

Once a small fishing village and now one of the biggest names in tourism,

has become now – with its tourism booming and its economy flying high.

Offering a more open and laid back atmosphere than most of Egypt, tourists feel

very much at home while visiting Sharm. Whit the high volume of Europeans

foreigners and the local residents have learned the customs of their visitors,

being able to provide great hospitality and a friendly environment.

Where is Sharm El Sheikh? 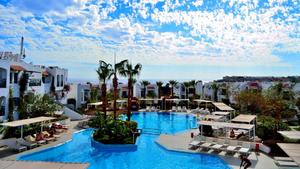 It’s located in the area of the Gulf of Aqaba across the coast of the Sinai Peninsula in the Red Sea, Egypt.

The Red Sea while surrounded by mountains behind, this resort area

offers countless accommodation options, cafes, restaurants, bars, and some of the liveliest nightlife in Egypt. 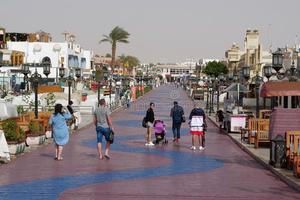 The best time to visit Sharm will probably depend on how you handle the hot weather.

For swimming and diving, the best months are March, April, May, and from

October to mid-November. In the summer there can be quite hot and while

the sea is pleasantly warm and you can enjoy long dives, it can be difficult

to sunbathe and go outdoors during the days, especially in August.

Diving in Sharm El Sheikh and Other Water Sports

and every hotel in the area offers and organizes scuba diving and snorkeling trips.

For those who are new to the diving experience, diving introduction courses

are available to get people started. For those who are experienced divers,

scuba diving is available and the Red Sea life is sure to not disappoint.

Park is one of the best diving spots in the world, with its coral reefs of fringing

and hermatypic types, over 220 species of coral can be found, 125 of them

being soft coral. The coral reefs can be found around 50 to 100 cm below

can range up to 9 km wide. Also at the Ras Mohammed National Park, you

making these places some of the diver’s favorite spots.

The Egyptian Government has created environmental laws to control

is undisturbed and the water does not get too crowded. Every marine species

this diving spot a must-visit to any diver out there. Other popular diving sites

around this area are South Bereika, Old Quay, Marsa Ghozlani, and Shark observatory.

on the reefs without getting in the water. This activity is a favorite among families traveling with young children while visiting Sharm.

around the area are perfect for these sports. The best place for beginners is

the Regency Plaza Resort or the Sea Beach, the absence of corals and rocks

makes it a perfect place to start, but wind conditions are lower. The ultimate

Lagoon of Nabq is located in a nature reserve area just north of Sharm.

Sharm offers some of the best beachfront styles hotel resorts out there.

Sharm is perfect for those who love and enjoy relaxing by the beach within all-inclusive holidays in hotels.

Most luxury hotels offer a private beach within the hotel property.

They also offer spas, great restaurants, and a wide range of activities for couples families, and solo travelers.

Watching the sunset from their sunbeds is a favorite activity among tourists,

so every day around sunset time, people gather at the beach to watch a spectacular show of nature.

Top-rated Attractions in Sharm El Sheikh and Places to Visit

and tombs in the rest of Egypt whether in Cairo or Luxor and Aswan.

Sharm remains the top spot in Sinai with many attractions to see, places to visit, and beaches to chill on.

Sharm el-Sheikh on the famous touristic map. It’s surrounded by some

of the world’s most incredible dive sites, houses glorious beaches with

most northerly mangrove forest, and has an amazing saltwater lake.

A trip there is a must-do for anyone in Sharm el-Sheikh. The best beaches are Old Quay Beach and Aqaba Beach.

Thistlegorm is one of the top wreck dives in the world. It was packed full of cargo

to resupply the British troops but was sunk during World War II by the Germans.

The wreck is located in the Straits of Gubal, off the western coast of Sinai.

by white-sand beach and swaying palm trees. The natural bay is considered

the main hub for tourists in the city. It’s famous for its cafes, restaurants,

luxurious hotels, and bazaars. If you are looking for a fun, relaxed day on the beach,

sunbathing, then Naama Bay is what you’re looking for!

St. Catherine’s Monastery. It sits at the foot of Mount Sinai.

It’s considered one of the oldest working monasteries in the world and is home to the famous burning bush of the Old Testament.

Sinai’s mountainous heart is a raw of beauty. Take a day trip and hike

from the summit and see an expanse of orange-hued peaks. Revered

the 10 Commandments, there are two main trails up to the top of the summit:

the Camel Trail or the Steps of Repentance. Combined with a visit to St.

Catherine’s Monastery, most travelers climb the mountain before dawn,

arriving in time to catch the sight of the sun rising over the desert.

(a.k.a. souq) area. You will find in abundance twinkling Arabic lamps,

it’s mostly famous for its herbs and spices. The market is different from the rest of Sharm;

it is surrounded by a local atmosphere.

the Colored Canyon. These swirling mineral-rich layered rock formations are

a showcase of the natural beauty of the desert. For natural lovers, a day trip

at nature as you scramble around the rocks and do some hiking.

If you are visiting Egypt with the little ones, spending a day at Aqua

Blue Water Park is going to be a treat and tones of fun. With 44 water slides,

games, and pools, this water paradise guarantees a fun-packed day for all ages.

Dolphina Park is the only dolphinarium in South Sinai. Located

Dolphina Park houses a pod of dolphins in its state-of-the-art facilities.

Experience the magical dolphin show and admire these wonderful

mammals while playing, swimming, and showing off their highly choreographed performances.

into its architecture and interior design. Designed by Fouad Tawfik,

the mosque has two minarets that are 70-meter high, which makes

it the second biggest in Sharm El Sheikh. This mosque is considered Sharm’s most spectacular piece of architecture.

a night of stargazing. Spend a fascinating evening of entertainment and

fun for all ages. Heading out to the desert, you will experience the real

traditional Bedouin hospitality. It starts with an Egyptian feast and

when the sun completely sets, you will get to gaze into the clear

night sky, straight up at the Milky Way.

The History of Sharm El Sheikh

The strategic location helped transform the once small

fishing village into a major part of the Egyptian Navy. Sharm was once occupied

The United Nations stationed a peacemaking force there until 1967 when

the Six-Day War took place and Sharm was recaptured by Israel.

remained in Israeli possession until the Egypt- Israeli Peace treaty in 1979.

Until 1967, Sharm was no bigger than a small fishing village. After the construction

of the town of Ofira by Israel, commercial development started to happen

in the area attracting tourism and capital investment. A hotel was built

on the southern side of the bay, a nature field school was built on the northern side,

After the regain of the Sinai Peninsula, the Egyptian Government started initiatives to

develop the city of Sharm in order to transform it into a tourist destination,

which worked and Sharm is now one of the most famous destinations for foreigners visiting Egypt.

Since its big development,  has hosted a number

of Middle Eastern peace conferences which include the 4 of September

1999 agreement the Palestinian self-rule over the Gaza strip and a number of other worldwide business conferences.