Marsa Alam is an old, small town located in the south of the Eastern Desert

in Egypt on the Red Sea. It is 790 kilometers south of Cairo and about 300 kilometers from Hurghada.

Overview: It is famous for diving and fishing. Now, Marsa Alam is one of

the fastest-growing holiday resorts in Egypt, which is popular with

windsurfers and divers. Sun worshippers are fortunate enough to 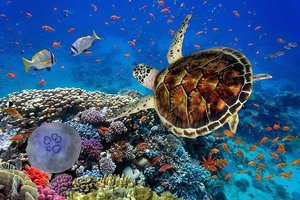 discover the resort’s remote tranquility. In the past few years,

it has become an important touristic destination,

especially after the opening of its international AirPort.

Many people, tourists, and Egyptians believe that, in the

In a few coming years will become another Sharm El-Shiekh.

The new International Airport is the first privately owned and

it is the first airport in aviation history operating under a complete BOT system.

Although previously a small fishing village, the construction of an International

The airport in 2001 has established as an upcoming and exclusive holiday resort.

With a host of tourism projects planned for the near future,  its set

to rival the popularity of established Egyptian resorts, such as Hurghada and Sharm El-Shiekh.

How to reach: By bus: You can reach it

Cairo and it takes about 12 hours. My plan: You can fly from Cairo to the flight that takes about One and a half hours.

Sightseeing:  its a village with a small harbor and stone quay;

it is the ideal base for a fishing holiday. The Dokki Shooting Club has a rest

and muraena are among the catches. There are some fine offshore coral

reefs and good diving facilities, for which the area has become well known.

of its unique beaches, it is also the starting point of deep fishing.  definitely

you can enjoy diving, snorkeling, and the different water sports and desert Safari.

You are offered the opportunity to make a wonderful excursion aboard one of the nicest boats.

There, you can practice all your favorite hobbies of diving and snorkeling

You are going to have lunch in an oriental style. Food served before your eyes and served hot.